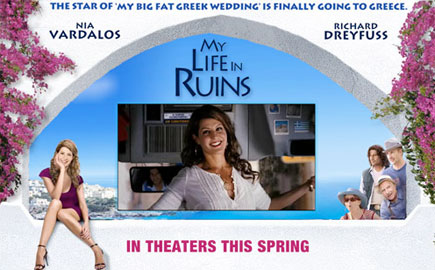 As in corporate branding, color schemes are important in nation branding, but unlike in the corporate world, governments have little power to choose and propagate the use of the country’s color palette. But some countries across the world are fortunate enough to be extremely consistent in colors, flag and scenery, and one of them is Greece, that small country located at one of the corners of Europe with a predominantly blue-and-white scenery and with a blue-and-white flag.

This week I’ve had another evidence that Greece really feels blue and white, just like its flag. Coinciding with the release of the “My Life in Ruins” comedy on cinemas across the world, I’ve noticed that the movie’s poster really breaths “Greece” in its looks – typography, colors schema, icons and images. In corporate branding, this kind of brand-consistent designs are well-sought after, and that’s why corporate branding design guidelines are issued for designers to follow. The more consistent all pieces of corporate marketing are, the more impact and personality the brand acquires.

The good thing about “My Life in Ruins” movie poster is that it helps reinforce Greece’s acquired image in the minds of people. Of course in most cases anyone’s acquired image of a country is stereotyped, and in the case of Greece stereotypes are ancient Greek philosophers and warriors, Orthodox monks, ancient ruins, shipping tycoons, beheaded columns, the Aegean islands, expressive people, traffic and smug, football and basketball fans, donkeys, black-clad grandmas, bouzouki and syrtaki. But over all these things, the image of small, cute and unspoiled whitewashed villages against a background of blue waters and blue skies dominates the minds of the world, at least on the Western hemisphere.

As it usually happens with countries, Greece’s image -not Greece the country- is built upon cliches. But do not revolve. Stereotypes and cliches may sound awful and ignorant, but in reality they have a very relevant role in making the world understable. Cliches and stereotypes help people navigate the world, understand it, and make decisions without having to read throughout the Encyclopaedia Britannica before choosing a car or deciding where to go on vacations. In fact, in the field of nation branding national cliches and stereotypes are useful shortcuts for nation brands. Additionally, cliches and stereotypes only survive, lest we forget, if they carry some truth with them – otherwise they lose traction and eventually, even if slowly, fade away from our minds.

In fact, cliches and stereotypes are a vector of a nation brand’s power. In nation branding, very cliched and stereotyped countries means they have a very consistent performance and image, at least consistent enough to become a popular idea and eventually evolve into a cliche. So, countries either suffering or enjoying national cliches are fortunate to have cliches, because only about 10% of the world’s countries are known enough to have cliches.

The upholding and defense of human rights is a cliche of Sweden, the precise and efficient engineering is a cliche of Germany, the mariachis and Aztec ruins is a cliche of Mexico. All of these three cliches survive today because these countries have delivered these goods, whether material or unmaterial, and at least partly, over the years with continuity and frequency. The result of this delivery are strong and well-built cliches – which are nothing but well-founded common ideas asociated with a country. What are the cliches of Kyrzigstan, of Uruguay, of Latvia, of Mauritania, of Bangladesh? These are unfortunate countries when it comes to nation branding – they have no image of its own, no reflection of its own on people’s minds, let alone cliches or stereotypes. 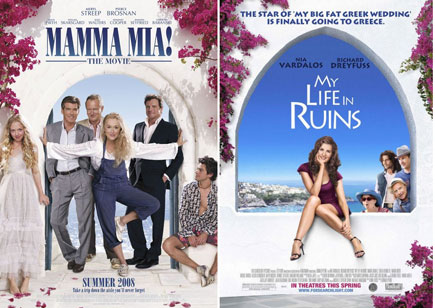 Cliches are strong because they enshrine dozens of things in them. When used, they unchain series of second level cliches, and that’s why cliches are so much used in the world. They are used as shortcuts to invoke brands – which are made up of hundreds of ideas, smells, images, feeelings, icons and experiences. And this is exactly the point I wanted to reach: cliches are widely used in marketing because they work very well. That’s why “My Life in Ruins”‘ poster is some similar to “Mamma Mia”, another movie located in Greece that stirred all Greek cliches and stereotypes. They both use cliches to evoke images of Greece that are attractive to a broad audience.

Greece continues to deliver the same experience to tourists, which has resulted in a very strong and consistent tourism brand. Executives of tourism boards from dozens of countries would kill for having only a fraction of what Greece has: a strong, unique image solidly built with consistency over decades.

This appears very positive at first sight, but let me dive on this a little more. If we analyze it objectively, something remarkable is that some of the things which have resulted in a consistent touristic performance over the years is that Greee has not modernized as a country as much as it could have, so some of the “Greek experiences” Greece delivered in 1980 are the same that Greece delivers today in 2009. Donkeys, Orthodox bearded “ayatollahs”, ta kafeneia (Greek male coffeshops) and Athenian suicide taxis are some of the things that haven’t changed much in the last 30, 40 years, which means that in a perverse way, these shortcomings have made the overall brand of Greece more consistent. That’s why having a consistent image does not always imply that it is a positive one, as I have previously elaborated.

But, don’t despair. In the case of Greece, it mostly is. The majority of cliches associated with Greece, whether be they for well-earned reasons like traditional Greek hospitality or Greek improved service performance, or for reasons derivative from a lack of complete development, like the traditional, well-kept beauty of Greek villages or the purity of many Greek unspoilt areas, are positive. 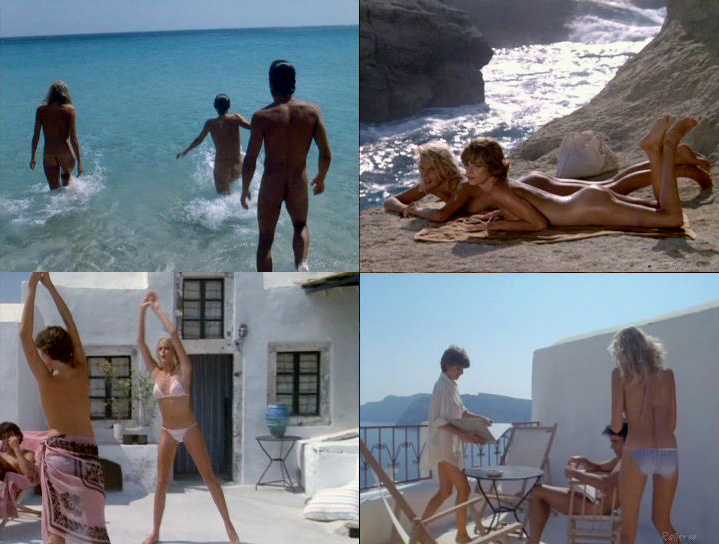 Now, as we revolve on movies and cliches and Greece’s brand, it is opportune to look back to “Summer Lovers”, another movie which, nearly 30 years ago, also helped Greece have the image it has, just like “Mammia Mia” and “My Life in Ruins” are doing now. If we look at these stills of the movie, it is evident that what the icons delivered are inmense blue skies, sculptural bodies bronzed by the sun, relaxation near the sea, white houses made of clay and stones… All of them are truly and genuinely Greek and some of the most weighted assets of Greece’s nation brand.