As regular observers of the Anholt Nation Brands Index know, they usually include a ‘guest country’ in each quarterly survey. Finally my dream has come true and Greece appears as guest nation at the Q2 2007 NBI. This is the article from the Anholt Nation Brands Index – Q2 Report, 2007 – Special Report 6. It has been edited for purposes of clarity.

Greece is the ‘guest country’ of the Q2 2007 NBI: it was chosen because it has long been conspicuous by its absence – it is one of the few longer-standing members of the European Union and one of the few major tourism destinations not to have been included in the NBI.

Greece, of course, also has the Olympics in its bloodstream. Not only was it the birthplace of the Games, but Athens was host to the last Summer Olympics in 2004. In a relatively small country such as Greece, we would expect a successful Olympics to lead to more positive perceptions of the country as a whole, and not just the host city. There are indications that this happened in Spain and Australia after the Barcelona and Sydney Olympics.

Greece was ranked 17th in the Q2 2007 Anholt Nation Brands Index, just behind Ireland and in front of Belgium. As this was Greece’s first time in the survey, we cannot tell whether its brand is improving or not, and if it is, whether this is likely to have been influenced by the Athens Olympics. Nevertheless, the results in the latest NBI survey provide a comprehensive picture of Greece’s brand as a nation and some pointers to what may be influencing it.

Greece’s dominant brand dimension is tourism. The survey placed it only just behind Italy at the head of the tourism league, with strength in all three areas that make up the dimension. Its people were ranked 6th for the welcome visitors expected to receive.

Greece was the leading European nation for heritage, both built and cultural. Heritage boosted its score in the culture dimension where it was 10th, but it was also seen to have strength in contemporary culture for which it was ranked 8th.

Apart from these areas, Greece languishes in the middle and lower reaches of the brand tables. Considering its identification with sport during the 2004 Olympics, and its victory in the European Soccer Championships in the same year, its 20th position for sporting excellence is a poor result. This suggests that Greece has failed to consolidate and build on its reputation as a successful modern sporting nation. Greece’s exports come in at 26th out of 38. In governance, it is the lowest-ranked member of the pre-2003 EU, coming in at 19th place.

Greece’s strength is in tourism, but that contrasts with other areas, particularly Immigration/Investment and Governance. Greece is not at present a country many people would be attracted to live or study in, and its government has less credibility than most of its fellow EU members.

Greece may take comfort from the fact that it is doing better than Portugal in brand terms. Portugal joined the EU five years after Greece, and has also not managed to convince the world that its economy and governance are near the level of most members of the Union. What is more, its tourism sector, according to our survey, is built on weaker foundations than Greece’s.

On the other hand, Spain, which joined the EU at the same time as Portugal, has built a more robust brand, stronger than or equal to Greece and Portugal in all six dimensions. Spain is a bigger country, which usually helps in brand building. It also hosted a successful Summer Olympics in Barcelona in 1992 and continued to build on that success.

Of course, not every nation has the same view of Greece. The most positive perceptions about Greece came from the Americas, where Mexico ranked Greece 13th. Brazil, Argentina, Canada and the USA also placed it above average. However, what is most remarkable about the range of positions Greece was given by our panels is how narrow it was compared with most countries. Only eight places separated 90% of its rankings. 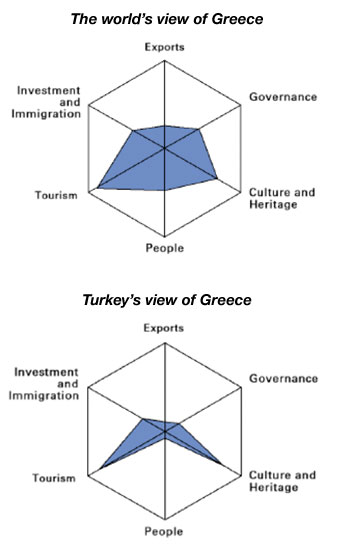 The major exception was Turkey. The world’s view of Greece is summed up in the chart up, while that of Turkey is shown in the graph with a moustache-like shape. Turkish panel respondents acknowledged Greece’s strengths in tourism and culture, but not to do so would to some extent undermine their own. Aside from these dimensions, however, the Turkish panel were extremely ungenerous in their responses. Overall, they placed Greece at 27th. It seems that intra-regional public diplomacy in the Eastern Mediterranean still has some work to do.

2 thoughts on “Greece at the Nation Brands Index”